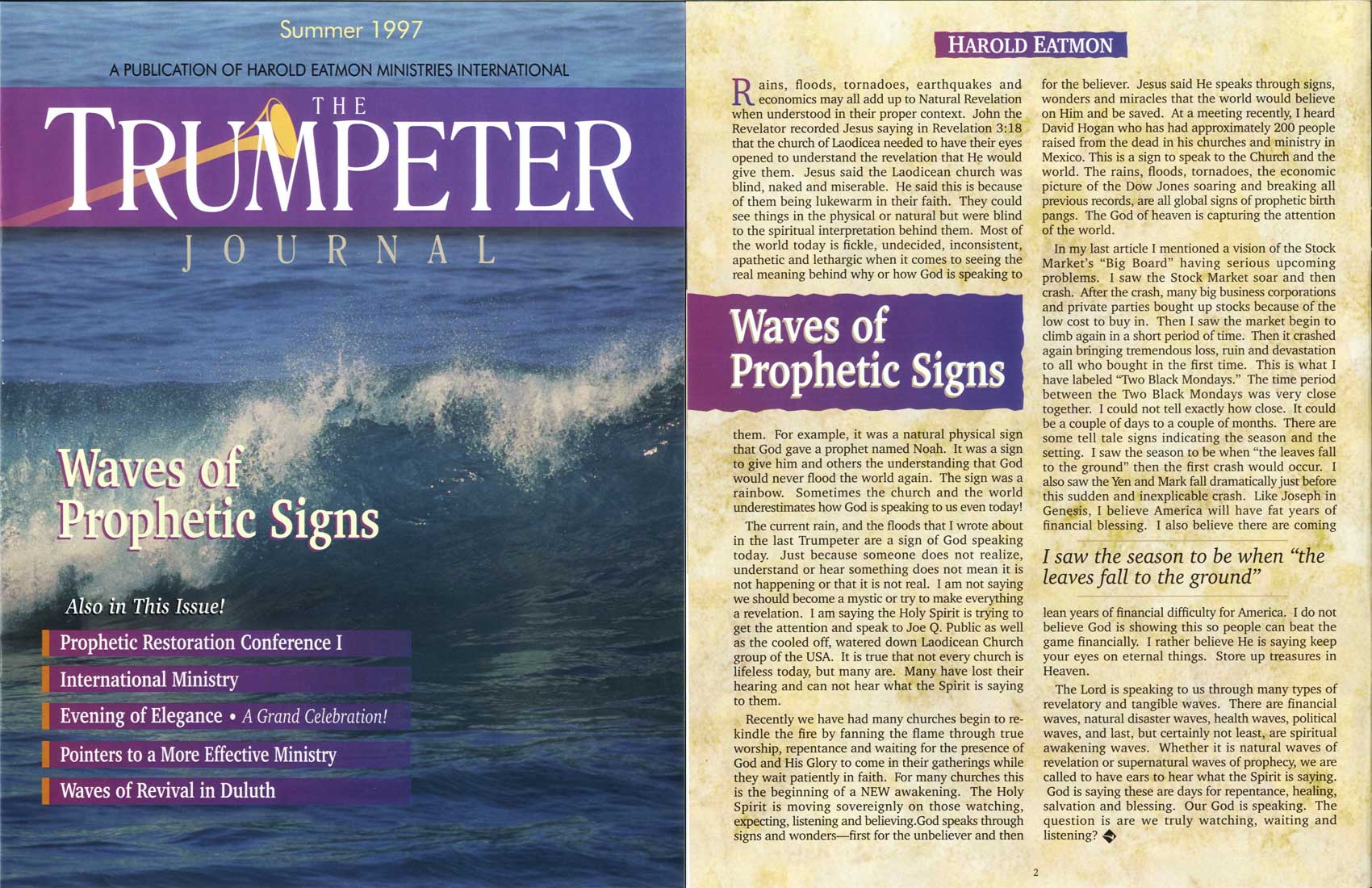 Rains, floods, tornadoes, earthquakes and economics may all add up to natural revelation when understood in their proper context.

The Laodicean church of Revelation 3:18 needed to have their eyes opened to understand the revelation Jesus was giving them. Jesus said the Laodicean church was blind, naked and miserable because they were lukewarm in their faith. They could see things in the physical or natural, but were blind to spiritual interpretation.

Most of the world today is apathetic and lethargic about understanding the meaning of why or how God speaks to them. For example, God gave a prophet named Noah a physical sign to give him and others the understanding that God would never flood the world again. The sign was a rainbow. At times, the church and the world underestimate how God is speaking to us even today!

When the significance of an event is missed, the event still happened, it is still real. The Holy Spirit is trying to speak to individuals as well as the cooled off, watered down American Laodocean church. Many churches are full of life today and many are not. Many have lost the ability to hear what the Holy Spirit is saying.

Churches are being rekindled by fanning the flame through true worship, repentance and waiting for the presence of God. His glory is coming in as they wait patiently in faith. For many churches this is the beginning of a NEW awakening. The Holy Spirit is moving sovereignly on those watching, expecting, listening and believing.

Through Signs and Wonders

God speaks through signs and wonders, “first for the unbeliever and then for the believer.” Jesus said He speaks through signs, wonders and miracles that the world would believe on Him and be saved. I recently met a pastor of many churches in Mexico who has raised many people from the dead in his ministry. This is a sign to the Church and the world.

The rains, floods, tornadoes, the economic picture of Dow Jones soaring and breaking all previous records, are all global signs of prophetic birth pangs. The God of heaven is capturing the attention of the world.

I Saw the Stock Market Soar and Then Crash

I had a vision of the stock market’s “Big Board” having serious upcoming problems. I saw the stock market soar and then crash. After the crash, many big business corporations and private parties bought up stocks because of the low cost to buy in. Then I saw the market begin to climb again in a short period of time.

Then it crashed again bringing tremendous loss, ruin and devastation to all who bought in the first time. This is what I have labeled “Two Black Mondays”. The time period between the Two Black Mondays was very close together. I could not tell exactly how close. It could be a couple of days to a couple of months. There are some telltale signs indicating the season and the setting. I saw the season to be when “the leaves fall to the ground then the first crash would occur.”

I Saw the Yen and Mark Fall

I also saw the Yen and Mark fall dramatically just before this sudden and inexplicable crash. Like Joseph in Genesis, I believe America will have fat years of financial blessing. I also believe there are coming lean years of financial difficulty for America. I do not believe God is showing this so people can beat the game financially. I rather believe He is saying keep your eyes on eternal things. Store up treasures in Heaven.

The Lord is speaking to us through many types of revelatory and tangible waves. There are financial waves, natural disaster waves, health waves, political waves, and last, but certainly not least, there are waves of spiritual awakening. Whether it is natural waves of revelation or supernatural waves of prophecy, we are called to have ears to hear what the Spirit is saying. God is saying these are days for repentance, healing, salvation and blessing.

Our God is speaking. The question is, are we truly watching, waiting and listening?