In Acts 2:12-41, Peter explained to a bewildered crowd on the verge of drawing false conclusions, how, as Joel said, in the last days the Holy Spirit would be poured out on people in visions and dreams.

While speaking by telephone with an intercessor, I received an open vision. Before my eyes, a holograph-like scenario began to play out.

This vision began with me, my wife Betty, and two of our HEMI intercessors. As we stood together, we were encompassed by a circular spotlight that shined down vertically upon us. The diameter of this circular light was six feet across. Everything else outside this light was dark. The four of us were talking together when, suddenly, the spotlight began to widen and grow larger. A circle of other faces began appearing around us. It seemed as though they had appeared out of nowhere.

Where Did They Come From?

First, the light shined to reveal their faces, then their shoulders and, eventually, their whole bodies were seen in the light. While this revealing process continued, I began to wonder to myself who these people were. Where did they come from?

The light widened far enough to see a second row standing behind the first row of people. As the light grew, the first row began to talk and intermingle with the second row of people. Some were talking, some just smiling and listening to others. I leaned over and whispered to one of the intercessors, “Who are these people? Where have they come from? I’ve never seen them before.”

The intercessor replied, “Harold, they’ve been here all the time!”

Hidden part of the Kingdom of God

The Lord was showing me a people who are a hidden part of the Kingdom of God. These people are not necessarily seen on platforms, behind pulpits, or standing in large gatherings.

The Lord said to me, “These are the Invisible People! They do not need a spotlight on them. They are true workers of the Kingdom. They are well hidden from the natural eye and are only concerned with doing the work of the Father. They have no thought of a famous reputation, nor do they worry about defaming themselves by their stance and selfless servitude. Their only desire is to serve with a servant’s heart. Their motives are pure.”

A Sovereign Move of the Spirit

When the vision concluded, the Lord began to speak to me through II Chronicles 29:36, Zechariah 3:9 and Acts 2:2. All these scriptures describe a similar occurrence where “suddenly” is the key element in a positive sense. In a sudden work of God, the Invisible People, like David’s warriors, like the disciples at Pentecost, will emerge and step out into their Kingdom roles with hearts fully prepared, anointed and devoted to serve their beloved King in troubled times.

These Invisible People are like the Levite people in II Chronicles 29:11-15 who at that time were more holy than the actual priests of their tribe. These deeply hidden, Invisible People, have done their homework, have sacrificially loved and served, and have learned their strategies.

In these closing days before the coming of Jesus Christ, there will come a sovereign move of the Spirit upon a now invisible and hidden people. The Lord will bring them forth into their Kingdom calling, having been taught by the Spirit Himself as I John 2:27 describes. Many will come alongside of those currently in ministry as a tremendous blessing of support and leadership.

The heart-knit relationships these men and women of God form with others will be unprecedented. They will display commitment equal to the mighty men of valor that came alongside David. These Spirit-fed friendships will build a harvest net strong enough to bring in a heavy catch. Loyalty and sacrificial love for each other will be characteristic of the new breed.

Recently, I have met a few men and women of God who, I believe, are a part of this sovereign move of God. They are a people unencumbered by man-made or church-made traditional restrictions, either because their salvation experience is relatively new or because they have abandoned some of the old order and beliefs they were formerly taught. They have started over with simply the Word, the Spirit, and much prayer.

I believe we will see a fulfillment of this vision begin now and continue into the twenty-first century as these men and women of God rise up and become a vital part of the “Church Without Walls”. 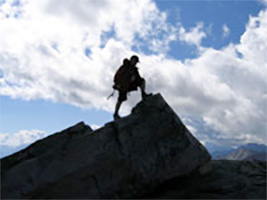