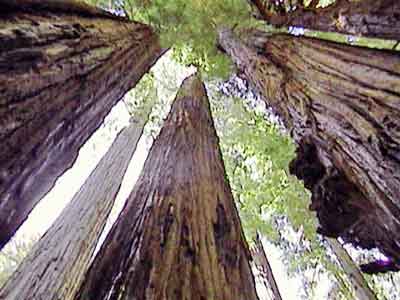 The Day of the Redwoods is Coming

On February 20, 1996, I received five visions, one right after the other, depicting future events.

A High Wind Blowing Across The U.S.

Starting from the southwest corner of the states, the high wind came with much heat and began to blow over huge mighty Oak trees. They were turned over upon their sides with the roots out of the ground six feet high. Then I saw the wind begin to blow through northern California. It reached the massive Redwoods with great force, yet did not turn them over like the mighty Oaks. After asking the Lord for the interpretations, the understanding came saying, “I am preparing a new army. The day of the Oaks is over; the day of the Redwoods is coming.”

The Oaks are Being Taken

Several months later I saw many huge Oaks laying on their side as I drove the freeway for miles. Several weeks later the Spirit of the Lord spoke to me to go to a particular meeting where a wonderful and anointed man of God would be speaking. The Holy Spirit said this Oak would be leaving because its race was successfully accomplished, the course was finished. The Lord said, “The Oaks are being taken to make room for the next move of My Spirit. The Redwoods are coming.”

The deep-rooted Oaks represent the men and women of God that stand alone. The tall Redwoods have more of a superficial root system and must grow in groves, knit together by their branches. The Oak I saw that night was taken from this present world three months later to become one of those included in what Hebrews 12:1 calls “the great cloud of witnesses.” His name was Lester Summerall.

There was a Redwood there that night, Lester’s grandson. The mantel was falling; the baton was ready to be passed. One race was finishing, another just beginning. It was a passing of responsibility like Moses and Joshua, Elijah and Elisha, John the Baptist and Jesus, the forerunner, running the final race. The new breed is taking their rightful position. It was a privilege to meet Lester that night for the first and last time here on earth. The Lord has revealed other Oaks also that are soon to pass the mantels and batons by the turn of the 21st century. In the next few years Redwoods will take their rightful place in God’s plan.

The Lord began speaking about the floods and rains that would come again this year. In the natural it will be devastating to many; in the spirit it will point out a new flood of blessing and finish the softening of hard hearts. The spiritually dry fields of the world will become soft for reaping of thousands of souls.

Signs and wonders will be brought to fruition and many will be saved and delivered. The former rain was a beginning for this season. The latter rain is coming like that of Joel 2:23. The harvest is coming through repentance.

God will wash the fields and hearts of men with a flood of repentance, miracles, signs and wonders. Pray for the harvest of these souls. 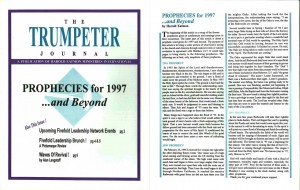 How To Receive Personal Prophecy and Engage a Prophet

How To Receive Personal Prophecy and Engage a Prophet