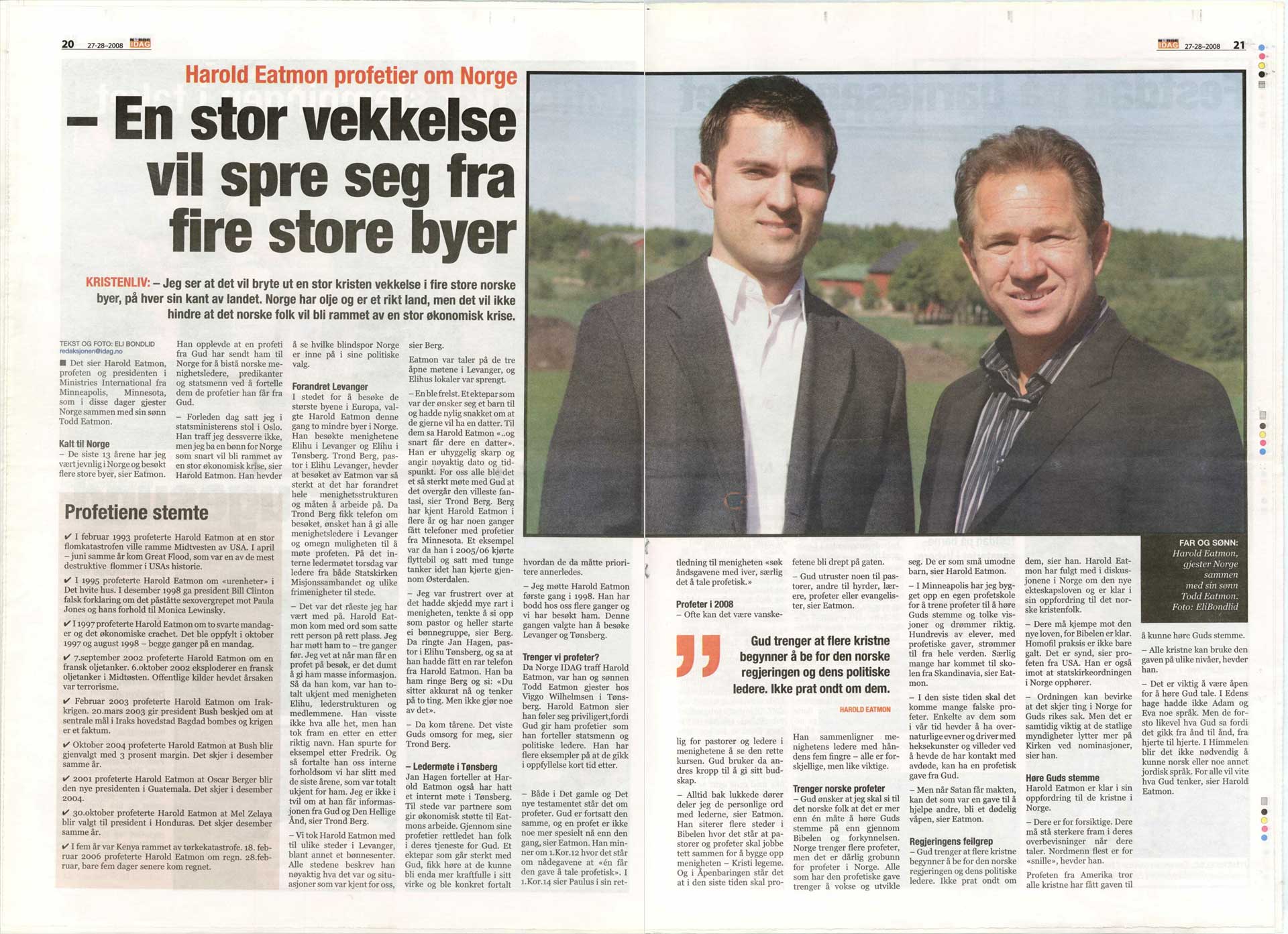 Prophecy for the Nation of Norway

A great revival will spread out from four large cities.

CHRISTIAN LIFE: – I see that a large, Christian revival will break out in four large Norwegian cities, in different regions of the country. Norway has oil and is a wealthy nation, but it will not prevent the Norwegian people from being hit by a large, financial crisis.

This says Harold Eatmon, the prophet and president of Ministries International from Minneapolis, Minnesota, who these days is visiting Norway together with his son, Todd Eatmon.

I have been to Norway regularly for the past 13 years, and visited several large cities, says Eatmon. He has experienced how a prophecy from God sent him to Norway to assist Norwegian church leaders, preachers and rulers of the nation, by giving them the prophecies he received from God.

Rather than visiting the largest cities in Europe, Harold Eatmon this time chose to visit two smaller cities in Norway. He visited the churches Elihu in Levanger and Elihu in Tonsberg. Trond Berg, the pastor of Elihu Levanger, claims that the visit of Eatmon was so powerful that it has changed the entire church structre and the way they work. When Trond Berg received a phone call, telling him about the visit of Eatmon, he wished to invite all church leaders in the Levanger region, so that they could meet the prophet. At the internal leadership gathering Thursday night there were leaders present both from the Lutheran state church, the Missions church and various other free congregations.

It was the best thing I have ever been a part of. Harold Eatmon delivered words that put the right person at the right place. I have met him two or three times before, and know that when a prophet pays a visit it is not good to give him too much of information up front. So, when he arrived here, he did not know anything about the Elihu church, the leadership structure or the members. He did not know the peoples names, but still picked out people one by one, using the correct name. For instance, he asked for someone named Fredrik. And then he told us about internal affairs that have weighed us down the past years, not knowing anything about these in the natural. I have no doubt that he received information from God and the Holy Spirit, says Trond Berg.

We brought Harold Eatmon to several places in Levanger, among others a prayer centre. At all places, he described accurately what it was and situations that already were known to us, says Berg.

Eatmon preached at three open meetings in Levanger, and Elihu’s auditorium was packed on all occasions.

One person got saved. A married couple that was present wanted to get another baby, and had recently talked about wanting a daughter. To them Harold Eatmon said: “…and soon you will get a daughter.” He is terrifyingly sharp and gives exact date and time. To us, it became such a strong meeting with God that it exceeds our wildest fantasy, says Trond Berg. Berg has known Harold Eatmon for some years, and has a few times received phone calls with prophecies from Minnesota. An example is when he in 2005/2006 was sitting in his truck, his mind filled with heavy thoughts as he drove through the Easter valley.

I was frustrated that so many strange things had happened in our church, was considering resigning from my pastoral position and instead starting up a prayer group, says Berg. That was when Jan Hagen, pastor of Elihu Tonsberg, called and said that he had received a strange phone call from Harold Eatmon. He had asked Hagen to call Berg and tell him: “You are right now thinking about two things. But do not do neither of these!”

Jan Hagen tells that Harold Eatmon also had an internal meeting in Tonsberg. Present at the meeting were partners of HEMI, who support the work financially. Through his prophecies, he directed people in their ministry for God. A married couple that already have a close walk with God, were told that they could become even more powerful, and were exactly told how they had to prioritize differently.

I met Harold Eatmon for the first time in 1998. He has lived in our home several times, and we have visited him as well. This time he chose to visit Levanger and Tonsberg.

Do we need prophets?

When Norge IDAG met Harold Eatmon, he and his son Todd were the guests of Viggo Wilhelmsen in Tonsberg. Harold Eatmon says that he feels privileged, because God gives him prophecies that he then gives to statesmen and political leaders. He has several examples that these were fulfilled shortly thereafter.

Both in the Old Testament and the New Testament, it is written about prophets. God still is the same, and a prophet is not anything more special now than he was back then, says Eatmon. He reminds of 1 Cor. 12 where it says about the spiritual gifts that “one is given to speak prophetically”. In 1 Cor. 14, when providing guidance to the church, Paul says “seek spiritual eagerly, particularly to prophesy”.

It can very often be difficult for pastors and church leaders to see the right course. God will then use other bodies to give his message.

A personal word to the leaders is something I always share behind closed doors, says Eatmon. He cites several places in the Bible where it says that pastors and prophets are to work closely together to build up the church – the body of Christ. And in the book of Revelations, it says that prophets will be killed in the streets in the end times.

God equips some to pastors, others to be shepherds, teachers, prophets or evangelists, says Eatmon.

He compares church leadership with the five fingers on our hand – all different, but equally important.

God wants me to tell the Norwegian people that there is more than only one way to hear God’s voice. Not only through the Bible or preaching. Norway needs prophets, but the soil is not very good, nor is the environment. All those that have the prophetic gift need to grow and develop. They are like small, immature children, says Harold Eatmon.

In Minneapolis, I have built a school of the prophetic, to train prophets to hear God’s voice and interpret visions and dreams correctly. Hundreds of students, with prophetic gifts, come to the school from all over the world. Particularly, we have had many students coming from Scandinavia, says Eatmon.

In the last days there will come many false prophets. Some of those who today claim to have supernatural gifts, and are involved in witchcraft, or claim to have contact with dead people, may actual have a prophetic gifting from God.

But when Satan gets the power, what was intended as a gift to help others, can become a lethal weapon, says Eatmon.

Mistakes of the government

God needs more Christians starting to pray for the Norwegian government and the political leaders. Do not speak evil of them, he says. Harold Eatmon ha closely followed the debate in Norway about the new law for marriage, and has a clear exhortation to the Christians in Norway.

You have to fight against this new law, because the Bible is clear. Homosexual practice is not only wrong. It is a sin, says the American prophet. He also is against a breaking up of the Lutheran state church.

This institution may contribute to good things happening for the kingdom of God in Norway. But at the same time, it is important that the politicians follow the advice of the Church when doing nominations, he says.

Hear the voice of God

Harold Eatmon is clear about his challenge to Norwegian Christians.

You are too careful. You need to stand up with a stronger conviction when you speak. Most Norwegians are to “nice, he claims.

The American prophet believes that all Christians have the ability to hear God’s voice.

All Christians can use that gift, at different levels, he claims.

It is important to be open to hear God’s voice. In the Garden of Eden, Adam and Eve had no language. But they still understood what God said, because it went directly from spirit to spirit, from heart to heart. In heaven, there will be no need for the Norwegian language, or any other earthly language, because all will know what God is thinking, says Harold Eatmon. 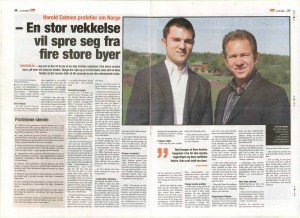